On Sunday 11th November 2018 children from Bourne Abbey wore their poppies with pride as they joined armed forces personnel, war veterans and others groups in the town on a parade through Bourne town centre.  Sunday marked the 100th anniversary of the armistice that brought an end to the first world war. As is traditional, the children ended their walk at the war memorial where they laid a wreath as a mark of respect to those who lost their lives.  Mrs Sarah Moore, Executive Headteacher, said ‘Our Christian Values this academic year have been Creation and Creativity in Term 1 and Friendship in Term 2 and these help to support the children’s understanding of Remembrance.  They have taken pride in selling and wearing their poppies.  I was especially proud of the Year 6 pupils from each school who attended the parade and laid our wreaths at the war memorial.”  The children also received a visit from *insert name here*, an acting member of the RAF, who spoke to the children during collective worship about the anniversary as well as the British values that underpin their roles and responsibilities.  The collective worship ended with the children observing a minutes silence and listening to a John McCrae’s ‘In Flanders’ Fields.’ 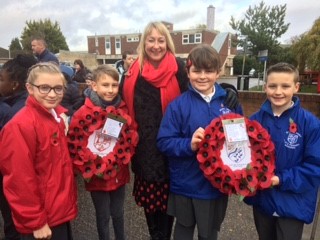