This term, Father Peter posed two questions to us in Collective Worship as he introduced us to our new Christian Value – Compassion. First he asked: ‘What is the most important thing you have been taught?’

Father Peter then asked us his second question:  ‘Who is your neighbour?’

Casey in Year 5 shared with us that her neighbour is Julie as she lives next door.

George in Year 2 advised us that our neighbour is anyone who lives on our street.

Father Peter then explained that a neighbour can be someone who is next to you, they may not even be your friend. In our Parable for the term – The Good Samaritan, kindness and compassion came from the least likely source.

Father Peter told us how this parable starts with a man asking Jesus a question.  The man who asks Jesus a question was very smart. Maybe he was trying to trick Jesus and see if he was a good teacher or not.  This is what he asked: “Teacher, what should I do so I can go to Heaven and live forever?”

Jesus replied, “What is written in the Bible?  What do you think?”

“That is right!”  Jesus said.  “Do this and you will live forever in Heaven.”

But the man wanted to know more so asked Jesus, “And who is my neighbour?”

Jesus decided to answer this question with a parable to help everyone who was listening understand.

“There once was a Jewish man walking along a road.  He was coming from Jerusalem and was heading to Jericho, which was a full day or two of walking.  The road was rocky and there were small hills all around.  The man was just humming to himself and enjoying the nice day when suddenly a group of men jumped out from behind a hill.  They took all his belongings and tore off most of his clothes.  They didn’t want him to follow them so they beat him up very badly, and left him lying and bleeding on the side of the road.

A few minutes later, a priest was walking down the same path and noticed the man lying on the side of the road.  Do you know what he did?  You’d think he would run over and help the man.  Instead he crossed the road and walked on the other side and acted like he didn’t see the man.

About an hour or so later, another man, called a Levite, was walking down the road.  Levites were people who assisted priests with their work.  He would probably help the man.  But you know what he did?  He slowed down and walked a little closer to the man, but then kept walking without helping him at all.

You might be thinking that maybe the man lying by the side of the road looked like he was resting or something and that is why the priest and the Levite didn’t stop to help.  The trouble is, it was easy to tell he was badly hurt.  The man was bleeding, had most of his clothes ripped off him, and he was bruised.

Just a few minutes later, another man came walking.  He was a Samaritan.  One thing you should know about Samaritans is that Jews didn’t like them.  Jews usually didn’t treat Samaritans very well, so they never got along.  The man who was dying on the road was a Jew.  So what do you think the Samaritan did?  You would think he would walk by and maybe even laugh at the man.

But as soon as he saw the man, he went over to him and felt compassion for him.  He put bandages on his sores and poured oil and wine on the sores to prevent them from getting worse.  Then he lifted the man on his own donkey and took him to a hotel to take care of him.

The next day the Samaritan took out enough money so the man could stay at the hotel until he was well enough to leave. He paid the man at the front desk and asked him to take care of the man.  If he wasn’t better after about two months the Samaritan would come back and pay for any extra cost.”

After Jesus finished the story, he asked, “Which of the three men do you think was a neighbour to the man who was left beaten on the side of the road?”

The man who asked him the question at the beginning replied, “The one who had compassion and helped him.”

Jesus told him, “Go and do the same.”

This parable teaches us to be like the Samaritan and show compassion to others. Compassion means to love, care, and respect and links to our 3Rs – Respect and take care of others. 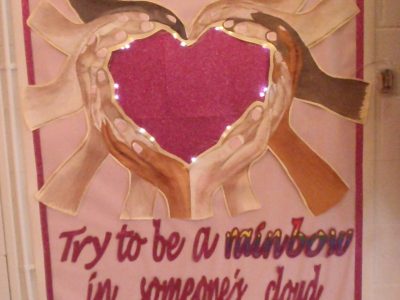