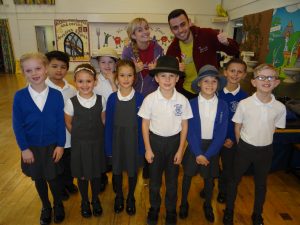 On the morning of Wednesday 27th November 2019, the Year 3 children from Bourne Abbey Primary Academy became part of a crime caper that had to be seen to be believed!

To complement their learning on the Ancient Egyptians, they visited the Museum of Egyptology. The day started just as we had expected, with the children attending seminars on the history and geography of ancient Egypt, the Egyptian gods and the process of mummification. The sessions were led by Fiona Hamilton-Smyth (the great granddaughter of Howard Carter), Elena Sunguard (the 70x great granddaughter of Cleopatra), and Professor Pinkerton (who claimed he was present when Tutankhamun’s tomb was discovered in 1922!). The children were having a fantastic morning adding to their already impressive knowledge of the topic, when suddenly, Elena discovered the most precious of all Tutankhamun’s amulets had been stolen. Instantly, everyone became a suspect… even the children of Bourne Abbey! But thankfully the French inspector, Inspector Baguette, was soon on the scene to discover the true identity of the thief!

Inspector Baguette promptly ruled out the two American tourists as they had taken so many photos of the rest of the museum there would have been no time for them to steal the amulet.  Then Fiona’s step-son, George, was eliminated as it was decided he was neither brave enough nor clever enough to have carried out such a feat. Then Baguettte established that it couldn’t have been Elena as she had been tied up and trapped in a sarcophagus at the time. However, he couldn’t rule out Fiona, as he thought it was likely she was trying to keep the treasure her grandfather had found for herself.

It was then that Fiona found the piece of evidence that would solve the mystery!

Earlier in the day, the Americans had taken a photo of Professor Pinkerton. When Fiona looked closely at the picture she saw he was holding a piece of paper, and on even closer inspection she realised that piece of paper was his birth certificate, and on EVEN CLOSER inspection still she noticed it clearly stated that Professor Pinkerton was born in 1852! “What? How could this be?” she thought to herself. Then suddenly she realised… the amulet was granting Professor Pinkerton everlasting life and he was in fact, well over 150 years old! And therefore is must have been HIM that had stolen the amulet to keep it from being returned to Tutankhamun’s tomb in Egypt. What a revelation! When Fiona and Inspector Baguette confronted him he admitted it all, he even owned up to dressing up as a mummy and wandering around the museum at night in order to keep the legend of the curse alive he was so desperate to keep the amulet forever.

Miss Lorna Ockwell, Assistant Head and Year 3 Leader, said “Wow! What an adventure Hogoblin Theatre company took us all on.  It was an experience the children will remember for a very long time.” 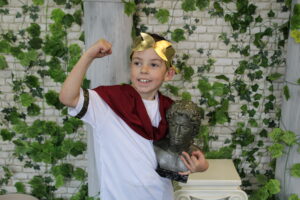